A fall day at Thistledown 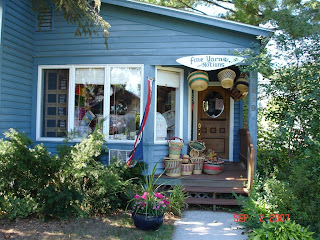 Susan, Stella the dog, and her Kiwi are here sitting on the couch. They keep me company and educate me in the finer points of creating a community of fiber artists at the Thistledown Shoppe.

We have been open since 6-29-07 and I finally have time to start a blog. It has been a very busy summer, I work 3 days at the Prosecutor's Office in child support and 4 days at the shoppe, so time has flown by. I signed my lease on early June and was opened for business 3 weeks later. I was going to show you pictures of the early shoppe, but they are on another computer, so I will do that later. Anyway, we started the end of June and just worked on building inventory and meeting our customers. I was lucky in that I had my knitting group, the KnitWits, helping me out. Betsy, Melody, and Liz gave me lots of support and ideas. Melody works in the shoppe on Mondays and Betsy fills in when needed. In the meantime, Jill, who used to work at another store, showed up and told Susan - and now here we are.
Susan is knitting a scarf out of the wonderful ShiBui Baby Alpaca. It is a DK weight yarn and very soft. With the weather cooling down and snow forecast within the next several days, it is a great thing to make. I am working on the ribwarmer - Bea Arthur style, with the Unspun Icelandic fleece that we buy from Schoolhouse Press. Mine is the silver color and Susan is making her ribwarmer out of the denim. The fleece is amazing with the colors varying in their intensity. This picure shows the color that Jill will be using for her ribwarmer. 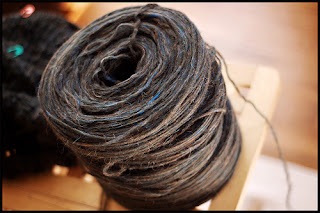 It is time for me close up the shoppe for the day. We have a class in the Moebius tomorrow, so it will be busy in the afternoon.
As my favorite knitter says, Knit On.
Posted by thistledown musings at 4:01 PM No comments: