Kate stopped by the shoppe today to pick up some socks for knitting while driving downstate. (Husband does the driving, she does the 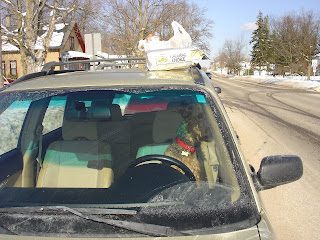 knitting.) When she stopped she had her dogs in the car. Kate took the food out of the car and put it on the roof, so the dogs would not be tempted while she came into the shoppe. Here are some pictures of Archie looking for her. 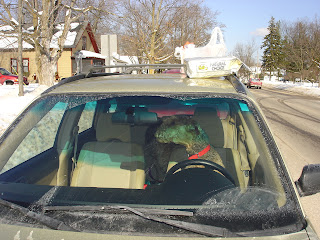 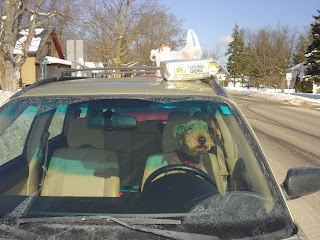 Don' we love our animals?
Posted by thistledown musings at 5:02 PM 1 comment:

Can you guess which one I knit? 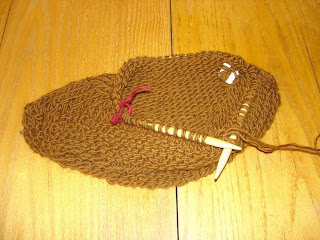 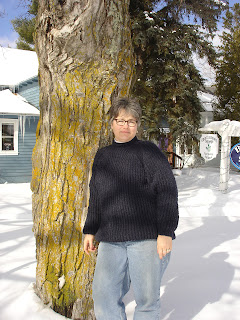 Susan knit one and I knit one. And guess which one I knitted?

Yup, it is not the wonderful navy blue sweater made out of the Natural Wool 10 Ply from New Zeeland. The pattern is from the Simply Knit 2 book. But I did knit the Bronze Patina Lamb's Pride for the Alpine Boot. And I made the same mistake that I made when I knit the first foot. I short rowed wrong. And I even used markers this time, as Susan suggested the last time I made that silly mistake. Guess I can't watch movies and knit the bottom of this boot. But, in the meantime, Susan was knitting away on this wonderful sweater. And now I can wear the shoppe sample, so there is some justice in this world.
Posted by thistledown musings at 2:15 PM No comments:

Getting Ready for the retreat and other thoughts 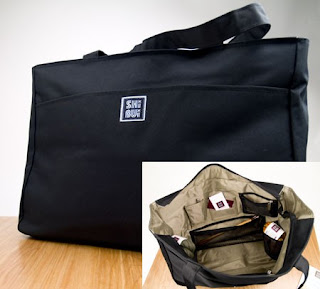 We are starting to receive some goodies from our vendors for our Knitting by the Bay retreat. ShiBui has sent us some wonderful bags and Skacel - needles and marking pins. Gerhild, from Lost Art, says she has some fun items coming in from her vendors. We also have some giveaways that the shoppe will donate. If you have not registered yet, you might want to think about it. February 25 is the deadline.

In the meantime, we are busy with new books coming in and restocking our shelves with needles, yarn, and books. Books include 2-at-a-time Socks, Folk Bags, Simply Knit 2, Great American Afghan Book, and Mason-Dixon Knitting. 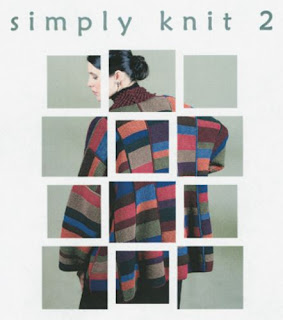 Susan knit up the Market Bag from the Folk Bag book. She used 2 skeins of the Euroflax 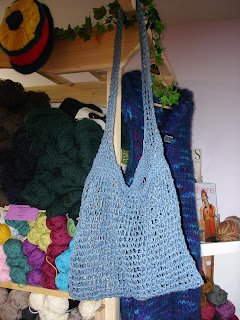 Sport in this lovely blue.


It is kind of a yucky wintery day today. Cloudy, with slight snow showers. My son, Ian, came over this morning and cleaned up our sidewalk. Then, because he looked like a mountain man, I took him to the south side of the building, Bayside Salon, and the ladies there changed him into mister handsome. I should have done a before and after, because you would have agreed with me. So, Susan and I are sitting here - with her knitting and me posting and doing whatever has to be done. Come on over and join us.

Oh, oh, look what I have been knitting. It is the Merino Kid ShiBui yarn in the Rapids colorway. The pattern is the Irish Hiking Scarf by Hello Yarns. 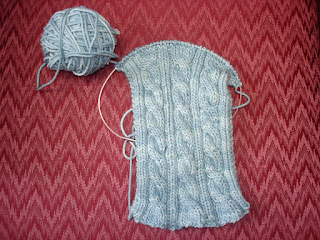 Posted by thistledown musings at 12:57 PM No comments:

I had to call my sister for help

Okay, I have been knitting consistently for about 7 years. I started back up when my daughter wanted a poncho. We went shopping and looked at what was in the stores and I refused to spend money on those awful acrylic things. We found a pattern and yarn and I was off and knitting. Ever since then I have been knitting.

For Christmas, I sent my sister this pattern by Fiber Trends and the yarn. Actually, it was her Christmas present, but she never received it until Saturday, because I had to mail it to her and I am 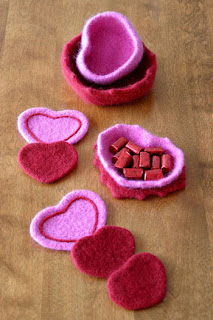 a procrastinator. Then she started knitting it right away. Saturday night she called me with questions on picking up stitches. We went through the pattern and what stuck with her was my explanation that this would be felted and not to worry too much as mistakes don't usually show.


Well, here is what she made. Didn't she do a great job? The yarn is Lamb's Pride Bulky, their new 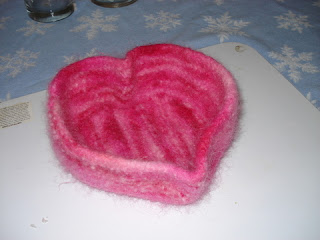 varigated colorway in the Strawberry Swirl.

Because she had so much fun knitting this bowl, I decided to make a sample for the shoppe. It would be a quick knit and if she could knit it, so could I. After all, my sister has only been knitting for one year and I had more experience than her.

Well, I had to call my sister for help. When I reached the same section she was in when she called me for help, I had problems. It didn't make any sense to me. So I called and she walked me through it.

Humph - so much for being the older, more experienced sister.
Posted by thistledown musings at 9:56 PM 1 comment: